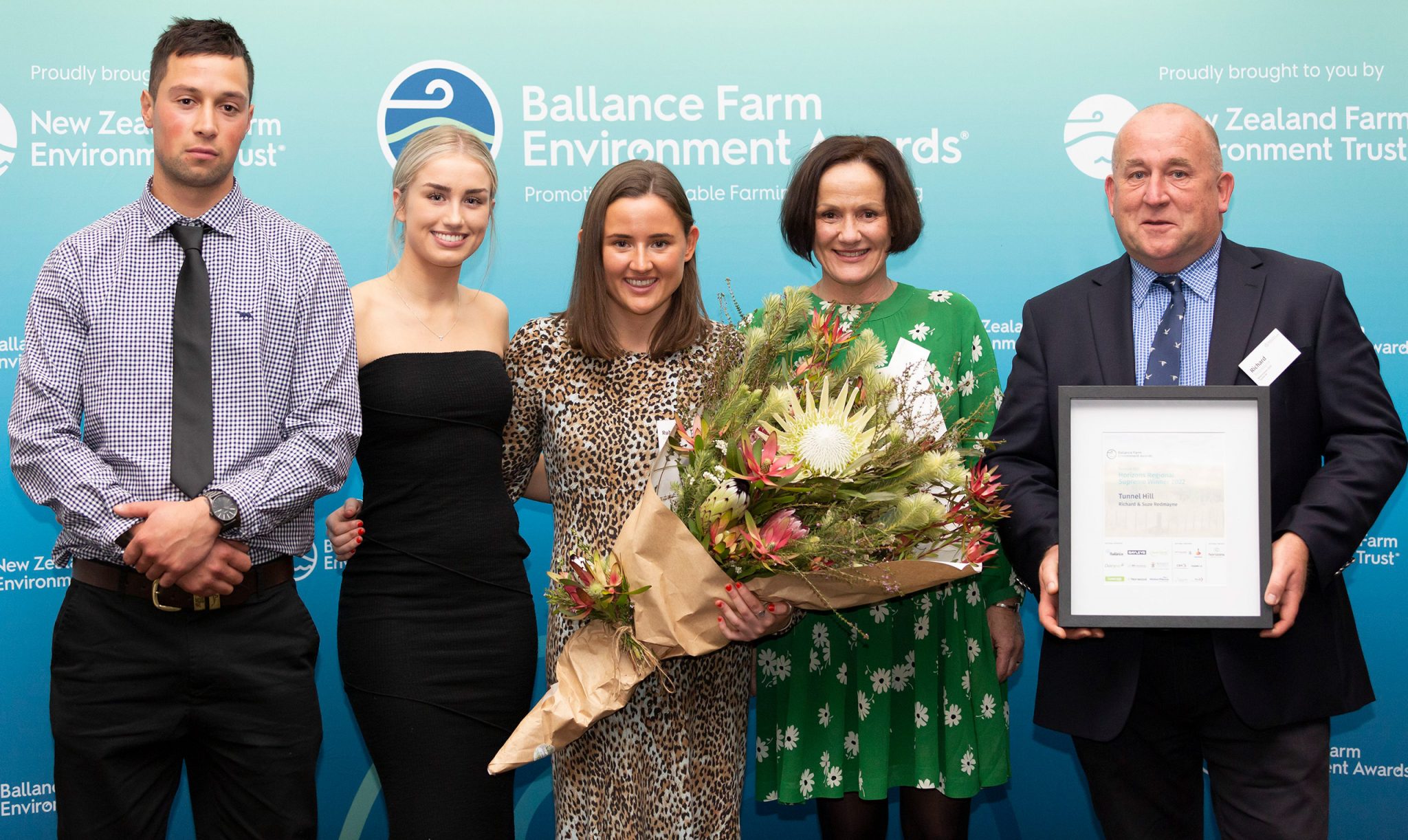 Richard and Suze Redmayne of Rangitīkei farm Tunnel Hill are the 2022 supreme winners of the Horizons Ballance Farm Environment Awards.

Run by the New Zealand Farm Environment Trust, the awards champion sustainable farming and growing. The Horizons awards cover the same area as Horizons Regional Council and were announced at a function in Palmerston North last week.

Richard’s great-grandfather bought Tunnel Hill in 1936, with future generations running the farm until Richard and Suze took over in 1993.

Sheep, beef, maize and forestry are farmed across 950ha of the property that features large stretches of coastal land. Their investment in forestry and additional native planting means Tunnel Hill is carbon negative.

Richard said he felt like the family was doing the right thing for the land and it was great to have that endorsed by the awards. They were also an opportunity to share their story with urban colleagues and people around the world.

There was something pretty special about being on a family journey with continuity of ownership and effort.

The judges said Tunnel Hill was a successful mix of enterprise and systems thanks to detailed planning and recording. They praised the conservation of historic water channels and tunnels, including tools to help fish migration.

“Long-term knowledge and understanding of the property are leveraged for off-farm business opportunities.”

Farm management is carefully tailored to match the climate, soil type and topography. There’s a strong focus on tree planting and wetland regeneration, with wildlife corridors created across the farm.

Clarke advised the Redmaynes to be brave and not stop what they have started. He also encouraged them to try to be a leader, not a follower, and to share their story.

Too often farmers and growers sit back and don’t express to the rest of the community what they do. Be brave in the challenging conversations you are going to have as supreme winners, Clarke said.

Woodhaven grows 23 different vegetables and has about 250 staff. It was established in 1978 as a lifestyle choice for father and son, Eric and John Clarke.

George and Ellen Bartlett from Gemel Trust, a dairy, sheep and beef farm at Stanway near Halcombe, won the soil management, sustainability and stewardship, integration of trees, and wise with water awards.

George said it was Ellen’s fault he was standing at the podium as she was the one who wanted to enter the awards. He did, however, enjoy the judges coming to their property as their questioning why he does things made him think. The Bartletts are on a community water scheme and have access to only half the water DairyNZ thinks they need to run a farm of its size. The cowshed yard is cleaned with recycled water.

Ellen said water is such an important resource and staff know to check the trough is working correctly before leaving a paddock when getting the cows in.

Angela Strawbridge won the people in primary sector award. She works for the Taonui-Hopkins Farming Group at Rangiotu and said sharing her passion with her team had helped them understand why they do what they do on the dairy farm.

Dan Steele and Sandy Waters of Blue Duck Station at Kaitieke, near Raurimu, won the innovation award and the Margaret Matthews trophy for commitment to sustainability.

The trophy is unique to the Horizons region and is in memory of Margaret Matthews who used to run the Horizons awards.

It was presented by her husband Tim Matthews, a Whanganui sheep and beef farmer. He said .5 per cent of the team of five million are producing food for the whole team and the rest of the world.

Farmers tend to be rugged individualists but the awards bring everybody together to help solve problems.

Food producers are well on a journey to sustainability but it doesn’t happen overnight and everyone is at a different stage of the process, he said.

The Upper Moawhango River Catchment Group won the inaugural catchment group award for the Horizons region. Established in 2018, the group now encompasses 15 farming properties that are on a combined mission to improve environmental outcomes and build on a strong community.

The other finalists were Blair and Anna Robinson from sheep and beef Te Rohenga Farmnear Shannon, Josh Millard from the Tongariro Dairy Unit at Levin, and Linton Streams Catchment Group.